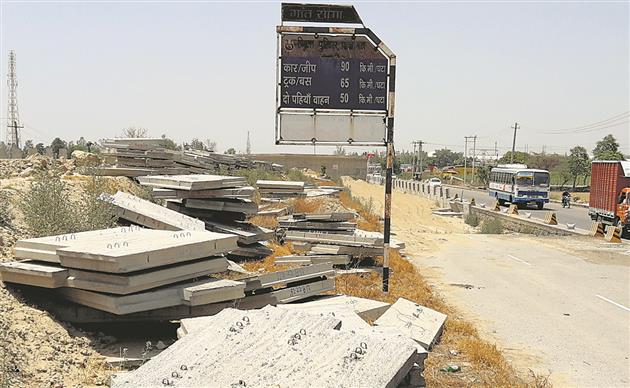 NHAI news – The National Highway Authority of India has issued a notice of intention to revoke the Highway Agreement with Essel Infraprojects Limited to extend the NH-44 by 12 lanes, including eight major lanes and four service lines.

The project of widening the highway from Mukarba Chowk in Delhi to Panipat in Haryana has not only missed its April 2019 deadline but only 44 percent of the work has been completed so far. The delay caused a lot of inconvenience to commuters, forcing them to face frequent traffic jams.

The road expansion project from Mukarba Chowk in Delhi to Panipat in Haryana not only broke the deadline in April 2019 but only 44% of the work has been completed so far. The delay caused many troubles for travelers, forcing them to face frequent jams.

The Rs 2128.72 crore project of Essel Infraprojects Limited was appointed in 2015 in a public-private partnership (PPP) position. The length of the 70 km bridge was to be 29 small bridges, 10 flyovers, 5 vehicle tunnels, five-passenger tunnels, 11-foot pedestrian bridges, and 15 major crossing points. According to sources, the company stopped working at all sites (bridges, tunnels, underpasses, service corridors, and other structures) about a year and a half ago. The sources said that the company has assigned work to the subcontractors who left work in the middle of the road after they did not receive their salaries on time.

The work has not resumed despite the numerous notifications notified to the National Highway Authority, an official of the authority said, on condition of anonymity. However, Sanjay Bhatia, a member of Karnal’s parliament, recently raised the issue of idle work in parliament, saying that work on the eight-lane highway has stopped, but the toll has been imposed.

Ashish Jain, Project Manager at NHAI, Delhi, said the construction company had delayed work over the past year. He added that several notices have been delivered to the company regarding the work.

Now, NHAI has reported its intention to revoke the project and the matter now rests with the bank that granted the loan to the company to complete the project. The bank must now decide whether NHAI or some other private company will complete the project. NHAI will soon start marking lanes and installing signs and reflectors to avoid accidents during foggy nights.