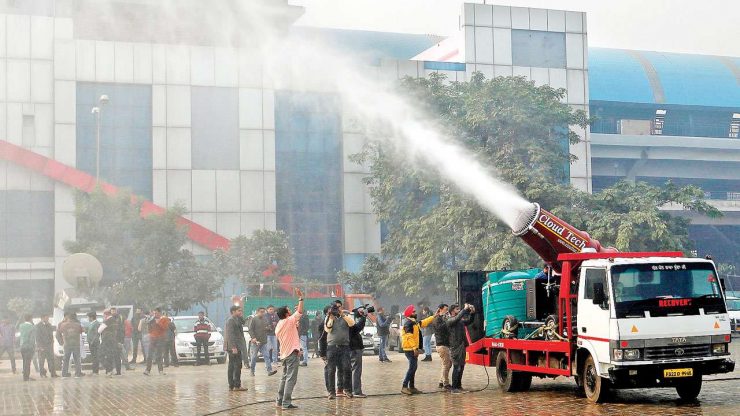 This means any site with an area of more than 20,000 square meters. The anti-smog gun can be mounted on a truck to cover the entire construction area.

GURUGRAM: The Haryana State Pollution Control Board (HSPCB) has mandated at least one anti-smog gun at every construction site larger than 20,000 square meters. A high-level committee on the feasibility of air pollution control technologies met to discuss a plan of implementation.

“It was decided that anti-smog guns must be made compulsory for construction projects in Delhi-NCR that require environmental clearances from (the) state/central level,” the recommendations state.

This means any site with an area of more than 20,000 square meters. The anti-smog gun can be mounted on a truck to cover the entire construction area.

An anti-smog gun is a device, shaped like a cannon, which sprays water into the air. It is connected to a water tank for continuous supply.

The water creates an artificial mist, which helps settle the dust and disperse suspended particles — especially PM2.5. The HSPCB officials said that this would make a big difference. Experts, however, said more needs to be evaluated.

“This seems like a cosmetic measure. In the capital, anti-smog guns were installed but pollution levels didn’t come down. There is a need to carry out proper research before recommending the use of this device,” said a former member of the Central Pollution Control Board (CPCB).

Niranjan Raje, former member of EPCA, agreed: “There is a need to test the device first and conduct more thorough research before making it mandatory for construction sites.”

Last month, the Supreme Court had asked the Centre to install smog towers and anti-smog guns to fight pollution in Delhi-NCR and ordered the CPCB to be part of the plan. Delhi had done trial runs of anti-smog guns earlier. Smog towers are essentially large-scale air purifiers, with capacity to clean up to 32 million cubic metres of air per day.

The regional office of the HSPCB has sent the directions to the GMDA, TCP and PWD — authorities that have big construction sites in the city.

There are more than 900 big construction sites in Gurgaon. The EPCA had imposed a blanket ban on construction early last month, when pollution levels had reached alarming levels. It was lifted after about a month.